If you were to ask Shawn Kuykendall to tell you about the greatest play of his professional soccer career, he’d take you back to July 2005. He was standing in the middle of FedEx Field next to Frank Lampard, one of the game’s legends. Shawn was shirtless.

An MLS rookie two weeks removed from his first game with D.C. United, Shawn had been following Lampard around for the better part of 90 seconds during the closing moments of an exhibition against Chelsea FC. The final whistle sounded, and Shawn ripped off his shirt motioning to Lampard to do the same.

If you stop by Shawn’s parents’ house, you’ll see Lampard’s No. 8 jersey next to their son’s No. 28. If you ever asked Shawn about how he got Lampard to trade, he would smile ear-to-ear and with a signature wink say:

“Greatest play of my career. So bazilly.”

If you were to ask about the greatest play of Shawn Kuykendall’s life, it was the day he learned that he was going to die.

That day also happened in July, eight years after standing next to Lampard shirtless. He didn’t say “bazilly” – a term he coined to express his pure elation.

A quick Google search for information on Stage IV Thymic Carcinoma victims would lead you to find that there is a 24% five-year survival rate. Shawn knew the numbers before he called.

On that same day in July, while sitting in a hospital bed surrounded by friends and loved ones, Shawn took a selfie.

Mozart had his music and Van Gogh had his paintings. Shawn had the selfie. He elevated the self-portrait to a level never before seen. If you dispute that, then you clearly missed his work titled “Musings in a Count Von Count Costume on Route 66.” 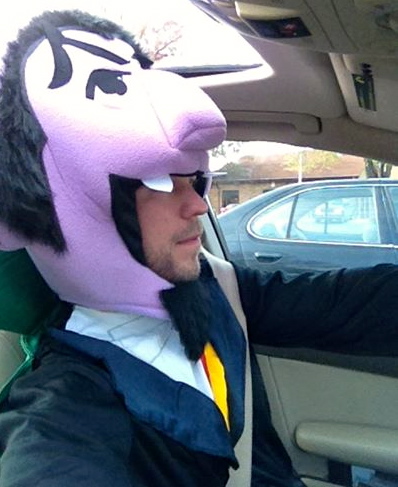 Shawn was given a death sentence. So he took a selfie.

Of course, he did much more than that. He started the website Kuykenstrong.com as a way of keeping people informed about his fight. It was also a platform where Shawn could share his faith with anyone who wanted to listen.

“My biggest ray of hope is that God has a purpose for me,” Shawn wrote in his first entry on the site. “And that has always been to bring glory to Christ. I believe in his ability to miraculously heal my body, but beating cancer has very little to do with beating it in an earthly sense. Cancer won’t beat me because it can’t take away my hope and joy in the salvation that Christ provides me. Is it scary?… oh yes… Is it hard?… the hardest thing I’ve ever faced… But is my sovereign God not in control? He most certainly is in control. I will hold onto that each day and fight my best to heal my body and fight each day to trust God.”

Over the next eight months, Shawn suffered. There is no doubt that he suffered. In January of 2014, he spent 27 days in Georgetown Hospital as the doctors feverishly tried to contain his pain. In the rare moments when the pain did subside, Shawn would crack a smile – always with the smile – wink, and speak the words that pushed him through six rounds of chemotherapy.

That belief was all that he needed. It was that unshakeable faith that carried him, sustained him. It was in that commitment to God’s plan where Shawn found comfort amid incessant physical pain.

Shawn’s Christianity was an indelible part of his being. During his fight, his faith poured out of him. It’s what kept him strong.

Not everyone shared Shawn’s beliefs or inherent trust that his illness was part of a greater plan. I suspect with his passing that some will find their own beliefs shaken.

C.S. Lewis once wrote: “You never know how much you really believe anything until its truth or falsehood becomes a matter of life and death to you.”

Shawn had many friends who believed in him but didn’t believe in God. He knew this. It only made his will to trust God even stronger. It was Shawn’s faith that guided him to the very end.

Of course – as you may have suspected – this is the end.

As I sit in the dark, I find myself wondering about the end. Was Shawn right to believe what he believed? Did it “work”? After all that pain and suffering, was faith in something he couldn’t see or even fully comprehend worth it?

The answer to that question is the greatest victory of Shawn Kuykendall’s short life.

I remember sitting on the couch with Shawn on a Saturday morning last November, watching an English Premier League game. Out of seemingly nowhere (though thinking about it now, he had probably been working on this thought for the first 60 minutes of the game), Shawn looked over at me and spoke these words, which I imagine will follow me until my end.

“I’m not really worried about death or dying, I’m not. Because here’s the thing – you know – we’re all dying. I mean, right? We’re all dying. So whether it’s tomorrow or 90 years from now, the end is going to be the same. We’re going to die.”

I hit pause on the DVR at this point because I knew he would want to come back to the game and Liverpool’s buildup play once he finished his thought.

“We are all given this great gift of life and we have this finite time to do whatever we want. So we live the best we can, and for me, that means living the way I think God wants me to live. I need God more than ever now.”

There was a pause as he rubbed his head, once full of dark flowing hair, now bald from the chemo.

“So praise be to God. I’m not going to waste time being sad or worried or scared. I have to fight. If I trust in him and fight, everything else will take care of itself.”

We sat in silence for a moment. I mean, how do you follow up a thought like that? Well, if you’re Shawn …

“But seriously, can we talk about Liverpool’s buildup play? Four passes to get up the field and a shot on goal. Four passes!? Bazilly.”

That was his essence. A thoughtful, spiritual, athletic, and vibrant soul. Shawn radiated life and love. Some people would call it style. Shawn would probably have called it swag. I believe it to be faith. Whatever “it” was, people loved him for it. Hundreds and thousands of people loved Shawn Kuykendall.

It was all very much worth it. None of it was wasted. Everything went to plan.

Shawn’s memorial service will be Saturday, March 22 at 11 am at The King’s Chapel.

The family asks that donations to Kuykenstrong be made in lieu of flowers.

Thank you for your continued support and prayers.